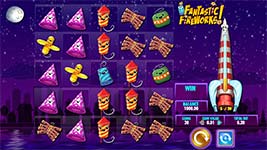 Get ready for explosive wins as you light up the night sky with the new Fantastic Fireworks online slot by IGT. This exciting new game features 5-reels and 5-rows spread across 10-lines of fun slots action. Bonus features in the game are incredibly rewarding and include the awesome new Rocket Bonus Meter. Ignite your gaming today with a few spins in Fantastic Fireworks!

Floating Reels Feature – Exploding symbols are created for all chains of 4, chains of 5, or intersecting wins. Exploding symbols involved in a win (other than the win that creates them), struck by explosions, or occupying the same position as another exploding symbol, each explode. Each explosion pays a prize based on how many explosions have occurred to that point during a single float. All symbols in winning combinations or struck by explosions disappear and empty spaces are filled as symbols rise from below, in sequence. Floats continue until no new winning symbol combinations appear.

Exploding Symbols – Every chain of exactly 4 symbols creates a Boom symbol in the second position of the chain (from left or top). Every chain of 5 symbols creates a Super symbol in the center position of the chain. Every intersection of 2 wins of the same type creates a CrissCross symbol at the intersecting position. Boom, CrissCross, and Super symbols explode when: They are part of a win (other than the win that creates them); They are hit by the effects of another exploding symbol; They occupy the same position as another exploding symbol. Each explosion pays a prize based on the number of explosions occurring to that point within a single float.

Super Symbols – Super symbols explode the most numerous type of symbol on the reels, not counting symbols that are part of wins or have already been struck by an explosion.

Free Spins Bonus – Triggering the free spins bonus awards 8 free spins with at least one exploding symbol guaranteed on the reels every spin. For every 10 scattered Sparkler symbols collected during the Free Spins Bonus, an additional 4 free spins are awarded.