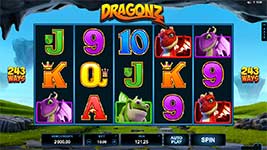 Get ready to meet four of the cutest and valuable dragons to have ever existed in the 5-reel 243 Ways to Win Dragonz Slot by Microgaming! Capture them all including Flint, Frost, Gobble and Switch and turn dragons into rewards in this blazing new slot with a top jackpot of 107,500 coins!

Set within a cave high in the mountains, you will be spinning the reels trying to capture the dragons.  There are four different free spins rounds each represented by a different dragon character. Flint sets the reels alight with an increasing number of Flaming Wilds for each spin. Frost freezes non-winning wilds until they crystallize into wins, keeping free spins spinning until all Frosty Wilds have been iced. Hungry for wins, Gobble turns symbol positions wild with his gooey green slime, creating Winning Wilds that stick fast during the feature. And sparks fly when Switch taps into the electric power of Stashed Wilds, awarding wins with a flash of lightning after three or more wilds have been stashed.

Once you have triggered the free spins bonus 12 times, you unlock the player choice reward where you can elect which free spins feature to play. But Dragonz isn’t just about free spins. The original Wild Deal, activated after a non-winning wild lands on the third reel, randomly distributes extra wilds onto the reels to award a guaranteed win!

Wilds – The wild symbol is easy to spot as it has the word “Wild” written across it.  Any non-winning spin with a wild on reel 3 deals extra wilds onto the other reels for a guaranteed win! The wild can substitute for all symbols except the scatter to complete wins.

Wild Deal Feature – The Wild Deal feature is a Microgaming invention and is activated after a non-winning wild lands on the 3rd reel.  It will randomly distribute extra wilds onto the reels to award a guaranteed win!

Free Spins – The purple orb encased stone symbol is the scatter and landing three or more on the reels will win you free spins.