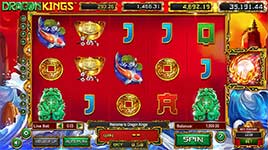 Chinese myths come roaring to life in Dragon Kings online slot by Betsoft Gaming, a modern take on a traditional tale. The game has 5-reels and 10-lines of action where the symbols are the real stars of the show. Alongside Asian cornerstones like lucky coins and jade figurines, Dragon Kings reimagines the guardians of ancient China’s seas as four standout, scaly symbols – all of them wild, and each with their own powers and identities. Spin the reels to win up to 280,753 Coins per spin!

The centre reel is reserved for the eye-catching and even more powerful Dragon King, who builds on the individual dragon’s blessings with his own 2x multiplier. The Dragon King also holds the keys to four tiered jackpots – from bronze to diamond. A special sixth reel contains a magical flaming pearl, which doubles the number of free spins awarded from scatter symbols (up to a possible 50). This symbol is essential for unlocking jackpots, in combination with the Dragon King and one or more of the other dragons. Line up all five dragons and the magical pearl, and receive a prize fit for a king: 2,000x your total bet.

Dragons of the 4 Seas Wilds – In addition to the Dragon King Wild, there are four additional dragon wilds in the game. Each one comes with an additional bonus like multipliers, additional wilds, free spins and more!

Dragon King Jackpots – The more you bet, the greater your chance to win a jackpot! There are four different sized jackpots that are triggered in various ways that include a getting a combination of certain symbols on specific reels. For example, the top Diamond Jackpot is triggered when you get the Dragon King + All 4 Dragons and Magical Pearl on Reel 4.