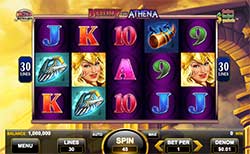 Ancient Greek treasures await in the 30-line Destiny of Athena slot machine from Konami!  Soar through the mystical skies of Grecian legend and battle alongside Athena for big wins. This 5-reel video slot promises an exciting time on the reels with Action Stacked Symbols, Wilds and Free Games!

First thing worth mentioning is the game’s graphics are typically fantastic like all Konami games.  The slot reels are set against a cloud topped with temples and a blazing sky. On the reels you’ll find Athena the Goddess of War, a shield, horn, sword and a variety of other symbols. The game has an expanded feature set from Konami’s normal features as well, like Super Free Games with a 100x multiplier and much more.

Skull Wilds – The skull with emerald eyes is a wild symbol and will substitute for most all other symbols in the game. You can land this symbol on reels 2, 3 and 4 only.

Normal Wilds – The Normal Wild symbol is simply the word wild written across it in purple and gold.  It will substitute for most all symbols in the game to complete wins. You can find this symbol on reels 2, 3, 4 and 5.

Super Free Game Feature – If the x100 symbol is revealed during the selection feature, you will win 8 super free games. Any win during this round will be multiplied by a random multiplier ranging from x10 to x100!