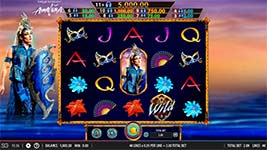 Journey to a mysterious island ruled by Goddesses and earn unfathomable rewards in Cirque du Soleil Amaluna slot machine from Bally. After directing her daughter’s coming of age ceremony, honouring femininity, renewal, rebirth and balance, Queen Prospera causes an immense storm. A group of young men wash up on the isle, triggering an epic love story between Prospera’s daughter and a brave young suitor. Theirs is a love that will be tested.

In a thrilling and lively new slot release based off the acrobatic romance performance, Cirque du Soleil Amaluna brings wonder and intrigue to its 5-reels and 40 pay lines.  Complete winning combinations on the reels with the wild symbol or trigger the Mystery Wild feature.  You may also win the Jackpot feature by landing 3 or more scatter symbols anywhere on the reels.  While the characters in Amaluna have their love tested, you will have your luck tested.  Play today to find out if luck is on your side!

Wild Symbol – WILD substitutes for all symbols appearing in the base game, except for scatter symbols.

Jackpot Feature  – Land 3 or more SCATTER symbols anywhere on the reels to win jackpots. Jackpots can only be awarded from the base game.

Meteor Wilds Free Games – Land on the METEOR WILDS wheel segment during the BONUS WHEEL FEATURE to trigger METEOR WILDS FREE GAMES. Five free games and 1x total bet are awarded. METEOR symbols substitute for all symbols during the feature, and pays the same as WILD. METEOR symbols fall onto the reel set at the start of each spin, and will remain on the reels for the duration of the spin. Between 4 and 12 METEOR symbols are guaranteed to land each spin. Free games are played with the same winning combinations as the base game. Free games use bonus reels that differ from the base game reels. BONUS and SCATTER symbols are not available in this feature. Additional free games cannot be awarded during this feature. The feature will end when there are no free games remaining.

Moon Goddess Free Games – Land on the MOON GODDESS wheel segment during the BONUS WHEEL FEATURE to trigger MOON GODDESS FREE GAMES. To begin, 7 free games, 1x total bet, and a line multiplier of 1x are awarded. Land MOON symbols to win additional prizes. MOON substitutes for all symbols in this feature. MOON is only available in this feature and appears on reels 2, 3 and 4 only. Each MOON symbol awards one of the following: Additional free games: 1, 2 or 3; Increased line multiplier: +1, +2 or +3 is added to the existing multiplier; Cash award from 5x to 62.5x total bet; The line multiplier may not exceed x10. If this value is reached, MOON symbols will not award multiplier increases, but award an alternate prize; Cash prizes shown on screen are already multiplied by the total bet. The feature ends when no free games are remaining. BONUS and SCATTER symbols are not available in this feature. Free games are played with the same winning combinations as the base game. Free games use bonus reels that differ from the base game reels.