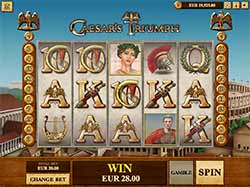 Set out across the Roman Empire and witness one of the most well known rulers in history, in Caesar’s Triumph slot by Makitone Gaming.  This game will take you back to one of the most well known and strongest empires to have ever existed where you will spin the reels across 20-lines of action. With wilds and free spins, you can rule the empire and bathe in its splendours, in Caesar’s Triumph!

On the reels you’ll be making combinations from symbols that include Julius Caesar, his wife Pompeia, Roman Legionnaires, a helmet and more. Aside from the symbols on the reels, the background is set against Roman temples and the Colosseum under a blue Roman sky. Each spin of the reels is accompanied by war trumpets from the Roman Legionnaires to signal the beginning of something epic!

Wilds – The Roman Legionnaires symbol is the wild in the game and substitutes for all symbols in the game to complete winning combinations.

Free Spins – The Roman Legionnaires is also the symbol that can trigger the free spins bonus feature. Land three or more to win up to 20 free spins complete with a multipliers of up to 6x!