You are now playing »
0 / 3209
Beavis and Butthead Toggle Lights 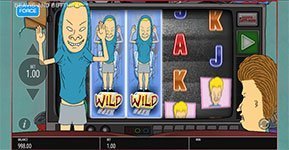 You’re totally about to score, when you take a few spins on the highly entertaining new Beavis and Butthead slot machine from Blueprint Gaming! Beavis and Butthead is a 5-reel 20-line slot based on the cult TV series following the story of two teenagers and their exploits. The game has 5 awesome features as well as the Just Deserts Big Money Bonus!

Wild Symbol – The Wild(s) symbol can be used to help form line wins by substituting for other symbols. The Wild(s) symbol substitute for all symbols except scatter symbols or bonus symbols. Only the highest paying win on each line is paid (for example 3 wild symbols being a win or those symbols being used with another symbol to make a win of 4 symbols will only pay which of those two is the highest). Wild symbols include: Standard Wild, Fly Wild, Cornholio Wild, Colossal Wild, Beavis Wild, Butthead Wild, Maxi Gulp Wild.

Couch your Cash – Couch Your Cash can be triggered randomly during any spin:

Don’t be a Buzzkill! Bonus – Triggered by revealing Don’t Be A Buzzkill during the Bonus. Pick Beavis or Butthead to reveal one of the following outcomes: CASH ADD (adds a cash amount based on the player’s total bet); BUZZKILL (increments the Kill-O-Meter. Filling the meter ends the feature). If the loud speaker animates to make an announcement then the player can trigger any one of the 5 additional Bonuses.

Customers Suck! Bonus – Triggered by revealing Customers Suck! during the Bonus. The player selects a food box to reveal an icon. Each type of food will match up to a total bet multiplier. Additionally, revealing the UPGRADE icon will upgrade the total bet multipliers or the possible feature that can be won during the bonus. Collecting Gold Super Burgers unlocks an additional feature bonus. Watch out for the not-so-special Beavis and Butthead Worm burgers. Reveal 3 and it ends the feature.

To ‘B’ or Not to ‘B’ Free Spins – Triggered by revealing To ‘B’ Or Not to ‘B’ Free Spins during the Bonus. On every spin either the Beavis or Butthead symbol will be turned into a wild. Additionally, there will also be overlays which can appear on any reel. The player has to accumulate a number of overlays to win one of the following: Super Spins – All Beavis & Butthead Are Wild On Every Spin. Just Deserts Bonus – this will award the player the Just Deserts Bonus.

Super Cornholio Free Spins – Triggered by revealing Super Cornholio Free Spins during the Bonus. During each spin Cornholio can appear from any toilet cubicle, turning reels into Wilds. Additionally, there will also be overlays which can appear on any reel. The player has to accumulate a number of overlays to win one of the following: Extra Spins – this retriggers the free spins as a one time only event. Just Deserts Bonus – this will award the player the Just Deserts Bonus.