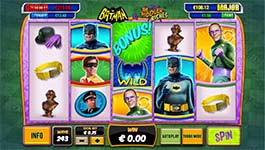 “Holy Gambles Batman!” The tricky Riddler from the old Batman series is back with a vengeance in the new Batman & The Riddler Riches slot machine from Ash Gaming.  Riddle me this, are you ready to go to Gotham City and help the crime fighting duo of Batman and Robin as they battle the conniving Riddler? Doing so will bring you into a 5-reel slot gem with 243 ways to win and some fantastic bonus features!

This game is the second release on our site (after Batman & The Batgirl Bonanza) based on the 1960’s Batman television show.  In fact the popular characters from the show make appearances on the reels as the top paying symbols and include Batman, Robin, the Riddler (as played by Frank Gorshin) and Chief O’Hara.  There is a super cool soundtrack to the game as well, which is both stealthy and exciting sounding.  It’s a terrific game and one that will make you feel nostalgic for the slapstick humour of old television programs!

Bat Logo Wilds – The infamous Bat logo is the game’s wild and it will substitute for all symbols except the scatter to complete wins.  You can find this symbol on reels 2, 3, 4 and 5.

Mystery Spins – Any spin could be a riddling win with transforming Mystery Symbols! These spins can be triggered on any main game spin.  Riddle your way to big wins on any spin as the Riddler adds mystery symbols to the reels. Watch as they all transform into the same symbol to create wins.

Collapsing Reels – Any winning combination will trigger a collapse of the reels. Any symbols in winning combinations will disappear after paying out and wave 2 will be triggered. During wave 2 new symbols fall from above and into the new spaces for the chance at extra wins!