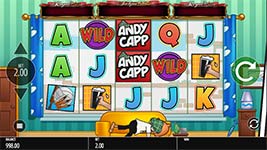 Andy Capp chronicles the life of Andy, a working class type of guy, who never actually works. Now you can join in the story with the fun new Andy Capp slot machine by Blueprint Gaming! Originally an English comic strip created by the late cartoonist Reg Smythe, the game has now been translated into a fun new 20-line video slot packed with features. Welcome to the hungover world of Andy Capp, offering multiple modifiers which can be triggered on any spin by waking him from his hungover sleep!

Andy’s Adventures – Land 3 Bonus Symbols in reels 1, 3 and 5 triggers Andy’s Adventure. Andy will wake from his slumber and walk across the screen to one of the five potential locations. When Andy stops at the location of his choice, the bonus will be presented to the player.

Hungover Andy – On any spin Hungover Andy can dream of one of the three below events. Just watch out for Mrs Capp, she’ll ruin any of Andy’s dreams; Dream Women: As the reels continue to spin, dream clouds will spam out of Andy’s head and populate reel positions. They will reveal a mystery symbol. As they reveal a symbol a separate dream cloud will appear of either a beautiful woman or Mrs Capp. Each time a beautiful woman is revealed, the symbol upgrades. If Mrs Capp is revealed, the modifier ends; Colossal Ale: Giant 3×3 Colossal Wild Ale are added to the reels. Colossal Ale Wild then spins off to reveal other colossal symbols; Andy’s Wild Dream: Random Andy Capp Wilds (Andy with his arms around two busty ladies) will get added to the reels.