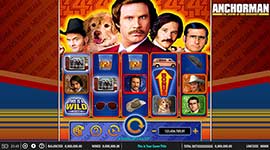 You stay classy San Diego, when you join the legendary Ron Burgundy and the rest of the Channel 4 news team in Anchorman slot by Bally! This licensed game brings all of the comedic fun from the original 2004 hit film to the reels in an action-packed game with 25-paylines in normal mode and 117-paylines in free spins. Combined with some fantastic bonus features, this slot awards a generous RTP of 96.03%. Now you can be like Ron and tell everyone, “I’m kind of a big deal” when you hit it big in Anchorman slot!

Whammy! Free Games – 1x Total Bet and 12 free games are awarded. The Wild symbol is wild for Champ, Ron, Baxter, Restaurant, Chicken, Slaw, Bat, Nail Bat and Hat. A ladder with 12 steps appears on screen. For each WHAMMY! on reels 2, 3, and 4, the award associated with the current step is awarded. If 1 or more WHAMMY! symbols are on screen, the ladder will advance one step before the next spin starts. All credit values displayed during the WHAMMY! Free Games have already been multiplied by the bet multiplier. Whammy! Free Games uses an alternate set of symbols and reels.  The Big Bonus is not available during Whammy! Free Games.

Sex Panther Pick Feature – In this feature, 15 bottles are displayed, and 3 picks are awarded. Each pick awards a prize, which is added to a running total. In addition to a prize, +1 PICK may be revealed with the selected bottle, and award 1 additional pick. After all picks have been played, select 1 of 5 packets from the pick field, revealing a multiplier of 2-10x. The credits awarded during the Sex Panther Pick Feature are multiplied by the selected multiplier. Packet pick is for entertainment purposes only. Credits appearing on screen have already been multiplied by the bet multiplier.