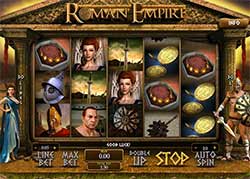 The Roman Empire is one of the most storied ancient civilizations to have ever existed and now you can relive some of its special moments in the free 3D Roman Empire slot game!  The Roman Empire grew extremely vast holding land territories in Europe, Africa and Asia. Rome was the capital and at the time was the largest city in the world.  It was among the most powerful cultural, political, military and economic forces in the world at its time and held rule over and estimated 21% of the world’s population. In this game, you can get some insight into this fascinating world and also escape with some of its treasures!

The slot is set against the darkened yellow sky with a really theatrical soundtrack playing in the background while you spin the reels. On one side of the 30-payline game you have a beautiful Roman maiden while on the other you have a powerful Roman Gladiator, both depicted with stunning realism.  The reels are set within a temple while the symbols on the reels include a Roman Emperor, the famous Colosseum, a Roman Gladiator, a Roman Soldier, a maiden, gold coins, a shield, a helmet, pottery and much more. All of these beautiful symbols help to create combinations or trigger bonuses to help you win big!

Emperor Wilds – The Emperor symbol is the wild and will expand to fill the reel on reels 2, 3 and 4. It will substitute for all other symbols except the Coins Bonus symbol.

Double Up – After any winning spin you’ll have the chance to double your winnings. Simply press double up and then choose whether the coin flip will result in heads or tails. If you’re right, you’ve just scored double your original win!