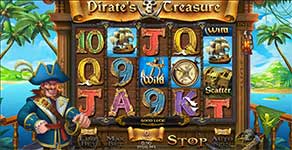 Ahoy Matey. Hop aboard one of the most feared Pirate ships and look for the buried treasure in fantastic entertaining 9-line 3D slot Pirate’s Treasure from Gameplay Interactive!  You’ll be joined by a sly little pirate man with a regal blue outfit.  He wants to find the treasure just as much as you do so he’s here to help!

The game is set in a Caribbean Harbor, probably somewhere in the 1500’s when pirates ruled the day. You’ll be on the anchored ship though with the most feared Pirate of the time, as you can look out at the vast island in front of you which is most likely hiding the treasure you seek.  But first, you can start your hunt on the reels of the slot which are sitting right on deck. Put together winning combinations with symbols like a Treasure Chest, a parrot, a compass, a Pirate Ship, card symbols nine through ace, an anchor, the Pirate and more. You’ll want to pay special attention to the Treasure Chest which is the game’s scatter and the Anchors which are the wild symbol.

Anchor Wilds – The Anchor symbol is the wild and substitutes for every symbol in the game to complete winning combinations when possible. All wild wins are also doubled in win amount because a 2x multiplier!