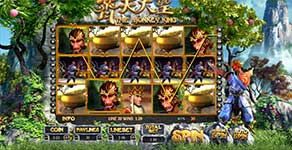 If you’re a fan of classical Chinese novels, you may be familiar with the story Journey to the West. In this story the main character is Sun Wukong or as we will call him from here in, the Monkey King! The story tells the tale of an extremely strong, nimble and fast monkey who was born from a stone and acquires supernatural powers through the practice of Taoism. At one point he rebelled against Heaven and was imprisoned under a mountain by the Buddha, until later he joined forces with a monk on the quest to retrieve Buddhist scripts from India.

The fable of the Monkey King is so famous that in China there was even a Monkey King movie released in 2014 starring Donnie Yen and Chow Yun Fat. This 30-payline slot is based on the same story but not the movie. None the less, the graphics and animations are stellar and just as cinematic in its own right! The slot is set in an orchard outdoors and you can see mountains in the background. The Monkey King is standing beside the slot reels cheering you on and occasionally hovering on a cloud beside the reels, when he’s not doing martial arts of course. The features round out this slot in making it one of the most fun slots we’ve had here in a while!

Tripitaka Free Spins – The Tripitaka symbol triggers the free spins feature when you get three or more on any three reels. During the Free Spins mode, you will earn 4 spins free with expanding wilds that will appear in rotation on the 2nd, 3rd and 4th reels and then go back to the 2nd. It substitutes for all symbols except the two bonus symbols.