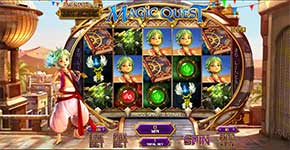 Are you ready to go on a quest more magical than anything you’ve ever been on?  This one takes place in a 5-reel, 20-payline slot appropriately called Magic Quest from Gameplay! This gorgeous game has you traveling to the middle east in an anime style journey and fighting mystical beings like a rock monster to earn treasures and wealth. The Aladdin looking little guy warrior stands beside the reels to cheer you on as you win big prizes!

Set in a city in the middle east, maybe even somewhere in Turkey, lies the Magic Quest a game which sees spells cast and supernatural powers that can grant you the chance for big wins.  There is a magic carpet on the reels, as well as a book of spells. You’ll also see the evil rock monster who despite his association with negativity will also award you prizes up to 200x your line bet. You’ll be accompanied on your mission by two warriors, a boy and a girl who will help you to access features to increase your wins.

Magic Split – The Magic Split symbol appears on reel 5 and the last symbol in a combination with this symbol on the fifth reel will be split, unless it is the lantern or bonus symbol.

Wilds – The Sword is the Wild symbol and will appear only on reels 2, 3 and 4 to replace any symbol except the Lantern expanding wild and Bonus symbol.

Expanding Wilds – The Lantern is the game’s expanding wild and can appear anywhere on reel 3, after which it will expand to fill the entire reel! It substitutes for all symbols except the Bonus symbol.

Magic Quest Bonus Map – 3, 4 or 5 Bonus symbols trigger the Magic Quest bonus feature. Complete the quest by following the map. There are five bonus games that await your discovery along the way. Each bonus must be completed before you move to the next bonus game. At the end of each bonus, you are returned to the main slot game. Once the magic quest is completed, the bonus game will restart from the beginning.
Choose your bet size and number of line to play and then Spin to Win!