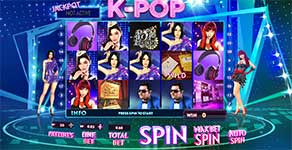 In 2012 a song phenomenon hit the Korean Pop music scene, published by the musical artist Psy. The song was Gangnam Style and this is the inspiration for the highly entertaining 3D slot machine, K-Pop by Gameplay Interactive!  Short for Korean Pop Music, this slot features some ultra hip music and some awesome features that will keep your adrenaline going and your senses peaked. Who knows, maybe you’ll throw on your dancing shoes and dance along!

The animations and characters in this game are stellar. The Korean beauties featured in this game are 3D animated, as real as they look.  The quality of the game is just outstanding.  Behind it’s 5-reels and 30-paylines is the stage and its set for a full night of entertainment. The spotlights shine while two animated pop stars stand on either side of the slot reels. On the reels you’ll see symbols like a male star that looks eerily similar to Psy himself, as well as three female K-Pop stars. There is also a music contract, headphones, fan mail, bill boards, an awards sign and more to help you earn features and big wins.

Scatters – Land three or more Concert tickets scatter symbols on the reels in any position to trigger free spins with a 2x multiplier. Hit 3, 4 or 5 symbols to earn 10, 15 or 20 free spins respectively.

Wilds – The fan mail symbol is the wild and will substitute for all other symbols except the microphone bonus symbol and wild symbol to complete winning combinations.

Instant Win Gangnam Dance – To trigger the Gangnam Dance instant win, you’ll need to get the K-Pop Slot Awards, Psy character, and then Bill Board symbols on reels 2, 3, and 4 in sequence on the reels.  You’ll then be rewarded with an instant prize!

Instant Win K-Pop Slot Award – When the K-Pop Slot Awards symbol appears before the square Golden Trophy symbol side by side on any of the reels, you will automatically win the bet of your spin back with a 2x multiplier applied!

Solo Performance Bonus Round – Land three or more Microphone bonus symbols on the reels to trigger the Solo Performance bonus round. The stage is ready for your live performance. Select the K-Pop character to reveal the performing artist. With each successful selection, you will win a prize. The winning prize will be doubled if you have three consecutive successful performances.

Winners Award Bonus Round – Get three or more Fan Mail ballots in any position on the reels to earn the Winners Award bonus round. To complete this bonus round, first select one of your preferred artists and the select the award you’d like to present them with!