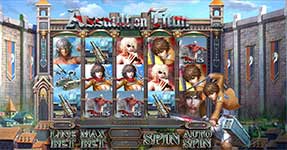 Based on the post-apocalyptic, dark fantasy manga series comes the incredible 30-payline 3D slots game, Assault on Titan! The game revolves around the idea that the humanity now lives inside cities surrounded by enormous walls as a first line of defense against the Titans, whom themselves are giant humanoid figures with an appetite for human flesh. Get ready for battle with your human compatriots to defend your walled city and you’ll be rewarded for your bravery!

Set in an interior courtyard of a castle compound, you’ll be spinning the reels with a fierce sword wielding figure there to protect you while you do battle on the reels.  The graphics and animations are brilliant in this game, as they are with all Gameplay Interactive slots.  Even the soundtrack sounds like it could have been used in a high-action movie!  On the reels you’ll find many forms of the blood thirsty titans, as well as warriors that are on your side.  You’ll also find weapons on the reels that will help with your defense of the city. Overall the slot, is brilliantly constructed so whether you know of the story of Attack on Titan or not, you’re sure to enjoy this great game.

Free Games – Hit three or more Titans Scatters consecutively from leftmost reel to the right and you’ll win the Titans free Games. You can choose one of three options each with different features: 20 Free Spins; 15 Free spins with a Symbol covering the entire first reel; 8 Free Spins with an Expanding Wild!

Wild Symbols – The horse flag of your city is the wild symbol and substitutes for all other symbols except the scatter and bonus symbols, to complete winning combinations when possible.

Mystery Wins – Watch out for Titan, for at anytime during spinning it can appear with a Mystery Win and award you with an instant prize amount!

Assault on Titan Bonus Game – Hit three or more Titan Bonus symbols consecutively from the leftmost reel to the right to win the bonus game. You will have to defend the wall from titan with a cannon. Successful frontal assault will be rewarded with prize amounts!