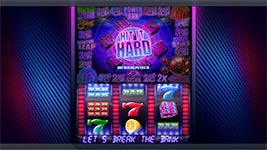 To celebrate a new decade we travel back to the magical days of neon, the 90s! The fluorescent lights take center stage in Elk Studio‘s Hit It Hard 3-reel slot where classic simplicity meets a feature-packed slot that you thought only exists in your dreams. And above all, by collecting two keys you can literally break the bank!

Hit It Hard is the sixth slot in the ELK Classic Series. This 5 payline retro slot is balanced to perfection with an innovative board game inspired bonus game. Every spin keeps you on edge until the last reel stops due to all the multiplier wild on the third reel. These multiplier wilds either contribute to an instant win or stick around for a re-spin.

Land the dice to trigger the bonus game, filled with multiplying wilds, stacked wilds, respins and two pachinko styled mini-games. As long as you keep winning, the bonus game goes on! Time to Hit It Hard!

Wild Re-Spins – Reel 3 is fully loaded with multiplier wilds and they are always in your favour. Either they deliver a nice multiplied win, or they lock the third reel and stick around for a re-spin. A lucky hit of red sevens and a 5x wild multiplier generate a considerable win and provides a good taste of what Hit It Hard is all about. Wild Re-spin triggers in bonus game spins as well and is a great second chance feature that increases the chance to get that single win that is needed to keep the bonus game going.

Hit It Hard Bonus Game – Land the dice on the center row on the third reel to trigger the bonus game. Dice rolls define the movements on the bonus game board. All sections award either a new roll of the dice, spins on the reels, a mini-game or break the bank. A single win in the awarded feature is all it takes to keep the bonus game going. So the bonus game can literally keep on for an infinite number of dice rolls! And as if that wasn’t enough – some of the features even have guaranteed wins!

Bank Bonus – The Bank is the crown jewel of the bonus game. Two collected keys are needed to unlock the bank. Hitting the Bank section with the two keys at hand literally breaks the bank and awards the maximum win which is incredible 250,000 coins!